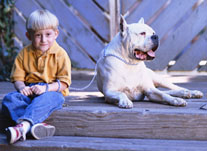 THIS LETTER was provided to us by the group of physicians who developed it. The
letter was widely published by the media, appearing in most major and national
daily newspapers, and picked up by many major television morning and news shows.
The process that lead to the letter involved one of the best examples of the
power of the internet to guide and to inform issues of significant concern. Here
is the story:

The Child Abuse Prevention Network co-hosts an Internet
Mailing List (“listserv”) for physicians in the field of child abuse and neglect.
Since early 1997, this list has explored a number of clinical topics, providing
physicians and other professionals with ready access to hard-to-find
expertise.

In the fall of 1997, national attention was riveted on the murder trial of an
English Au Pair, Louise Woodward, in the case of an infant who apparently died of
what is popularly known as Shaken Baby Syndrome (SBS.) The attention was especially
great, because the trial was televised, and the daily progress was reported often on
the national network and cable news outlets.

Physicians on our Mailing List followed the case closely. As matters unfolded,
the list discussion turned to the question of how physicians could best assure that
scientific expertise could be brought to bear in an effective and responsible way
in future cases. The letter below was the result of those discussions.